Amalfi coast, map and how to get around 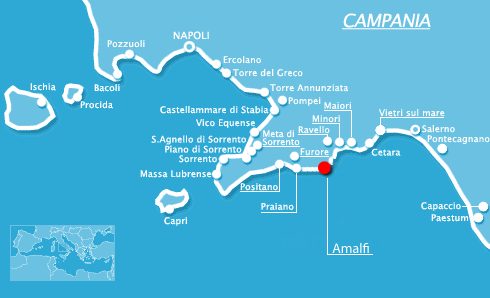 From Positano a Vietri Sul Mare passing through Ravello, Amalfi and Cetara: The Amalfi Coast is part of the Campana Coast situated south of the Sorrentine Peninsula and Naples that faces the Gulf of Salerno. This part of the coast is not only a geographical location it is like a balcony overlooking the Tirreno Sea, where you can see the immense slopes of Mount Lattari, the beaches and the terraced lemon, olive and grape coltivations.

The first town you will get to leaving from Salerno is Vetri Sul Mare. Crystal clear waters, dreamy beaches that will make you fall in love with the Amalfi Coast. Known all over the world for its famous ceramics, the characteristical streets of Vetri Sul Mare are packed with little boutiques that respect the traditional craftmanship of handpainted ceramics. 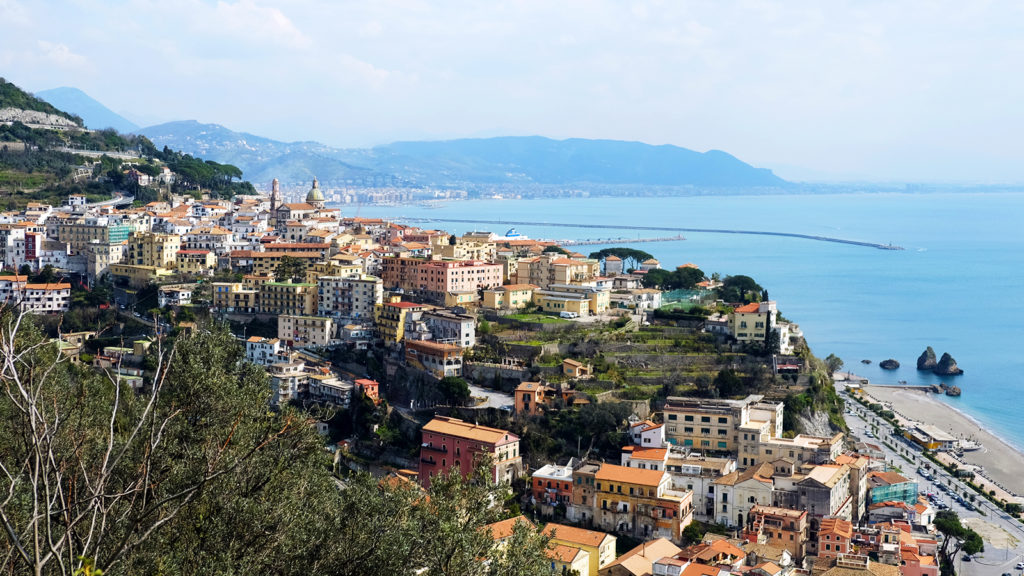 Conca Dei Marini gastronomical delicacies that characterise its tradition, the most delicious and important is la sfogliatella Santa Rosa, la tonnara and the pomodorini a piennolo.

La sfogliatella Santa Rosa, was first discovered by accident in the 1700 by the Domenican Conservatorio di Santa Rosa di Lima who decided to add sugar, milk, dried fruit,corn flour and sour cherries to a little left over dough. The sweet was delicious, and became a symbol of the village, and to this day, in August, they celebrate with a Festa dedicated to the goodness of this delicious pastry.

Conca dei Marini culinary culture is represented by the tonnara, (tuna) a system of fishing with nets trapping the tuna, that pass through during seasonal migration, and pomodorini a piennolo (similar to cherry tomatoes), typical of the area, are freshly picked , tied together and kept in the shade to conserve all year round. Patience, expertise and the salty sea air transform these little pomodorini into a very savory delight added to mussell soup and various other dishes. 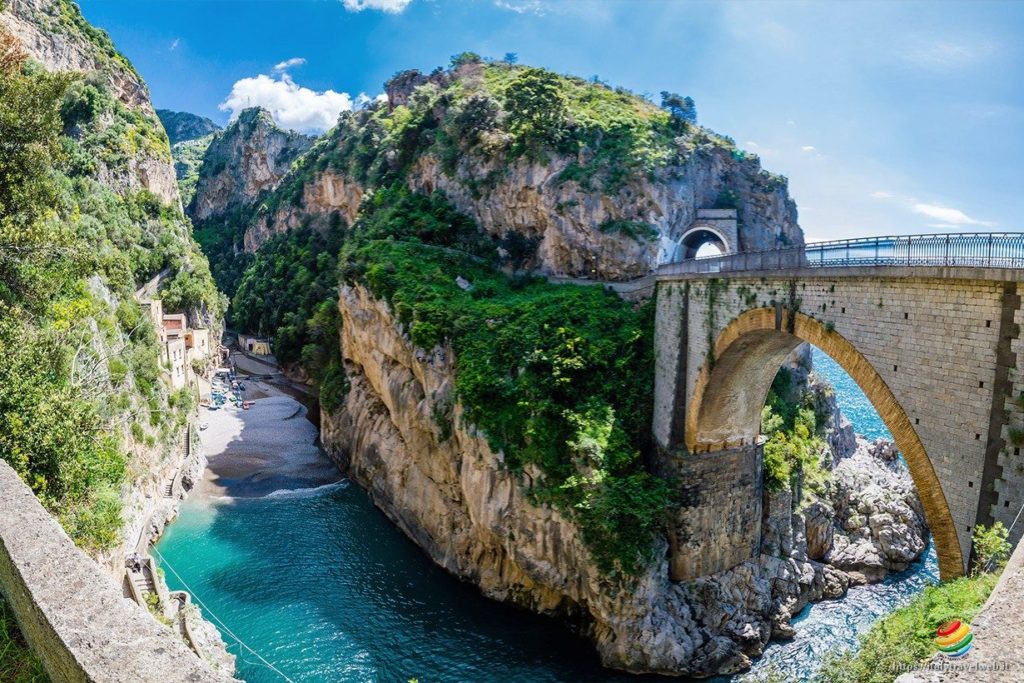 Another marvel of the Conca dei Marini is La Grotta dello Smeraldo, about 30 metres wide and 60 metres long and 24 metres high. Found in 1932 by a local fisherman by the name of Luigi Buoncuore, the Grotta dello Smeraldo can be reached by boat from Amalfi or from the state road 163 there is a lift or stairs that take you down.

When the sea is calm and the sun is high, the grotta dello smeraldo is magical, light from the sunbeams dancing around giving the feeling of a magical kingdom.

The most beautiful beach of the Amalfi Coast

Discover the beauty of the beaches of the Amalfi coast at an exclusive price.

In the vacinities of Nerano, on the western end of the Amalfi Coast you will find Marina del Cantone. Sheltered from the winds Marina del Cantone is the perfect place to relax in the sun. The water is transparent and there are many restarants that offer the typical local dish pasta and zucchine or a seafood dish.

Positano is one of the most popular tourist attractions of the italians and the foreigners. Its caracteristic streets, the houses all grouped together, beautiful beaches, enchanting sea and the local cuisine lure hundreds of thousands of tourist in the summer season.

Maiori beach’s panorama is definately different from the other beaches along the Amalfi Coast, a kilometer of sandy beach and many swimming establishments on a flat seafront. The swimming estiblishments offer the possibility of hiring watercrafts, or organising a tour of the Grotta di Pandora and the Grotta Sulfurea: attractions that will make your day interesting and fun.

If Maiori has changed its aspect, Minori has remained the same, with its 250 metres of beach and 3 swimming establishments, facing south it is kissed by the sun all day.

A small village facing the sea, groups of antique houses, a tower and a church with a large majolica dome make Cetara the classic postcard immage. Cetara is principally know for its tuna from the Amalfi Coast, and its famous anchovy sauce and also to enjoy their delightful small beaches. 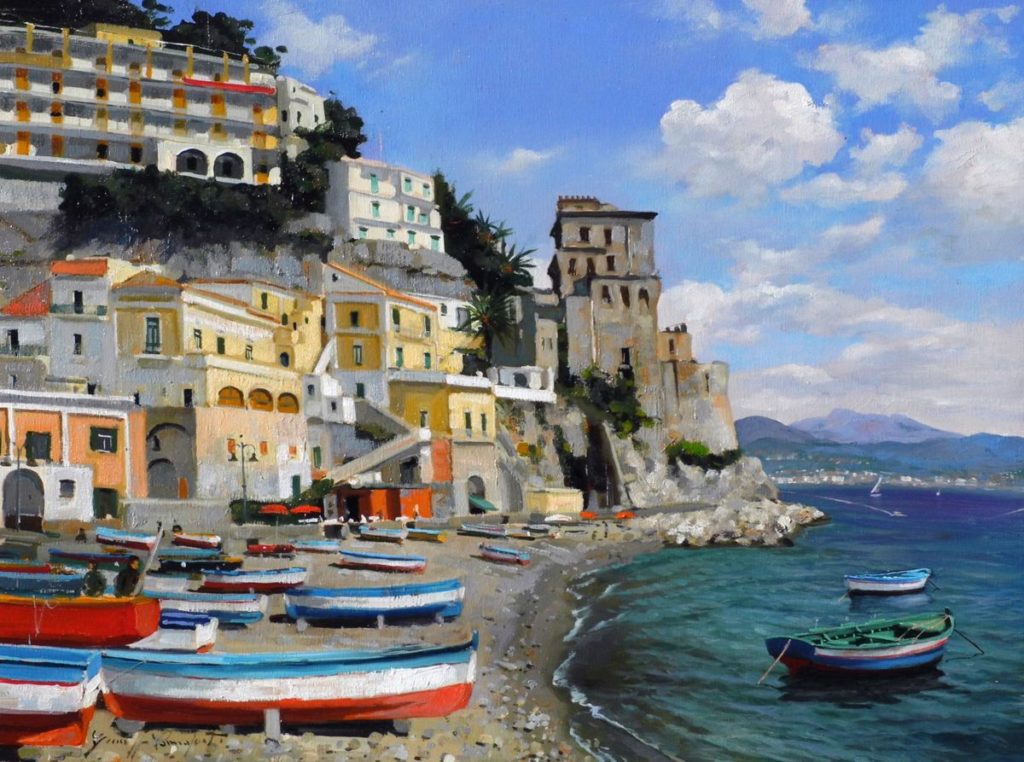 How to get to the Amalfi Coast

How to get to the Amalfi Coast from Rome

How to get to the Amalfi Coast from Naples

How to get to the Amalfi Coast from Salerno

How to get to the Amalfi Coast from Sorrento

Discover the beauty of the Amalfi coast at an exclusive price.